Short on time but big on adventure? This one is for you!

This is a whirlwind tour of the best of Egypt both in and out the saddle. We start in Cairo, then onto Luxor before ending at the Red Sea. Hold on tight, this is the ride of your life! 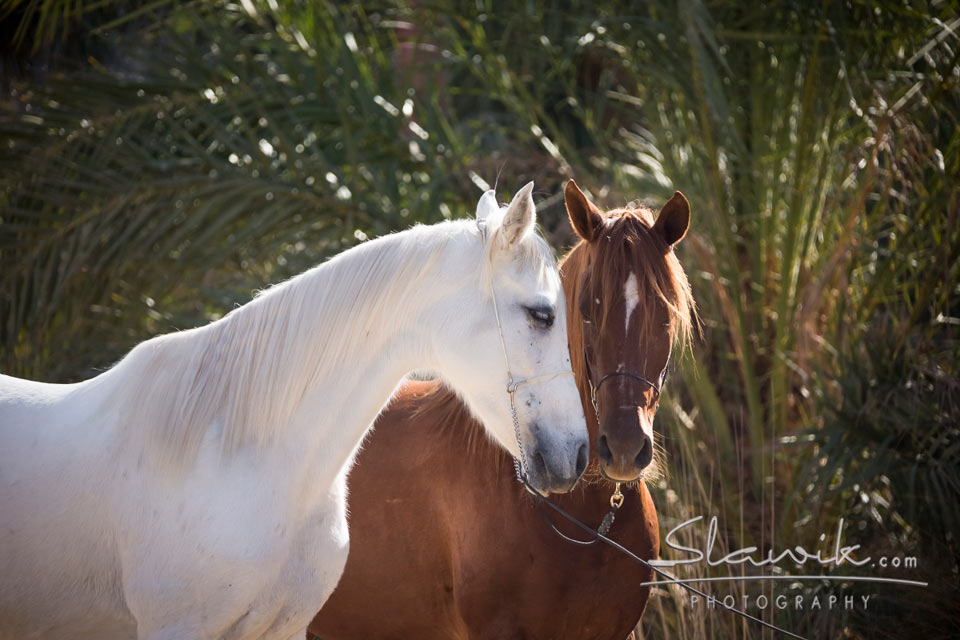 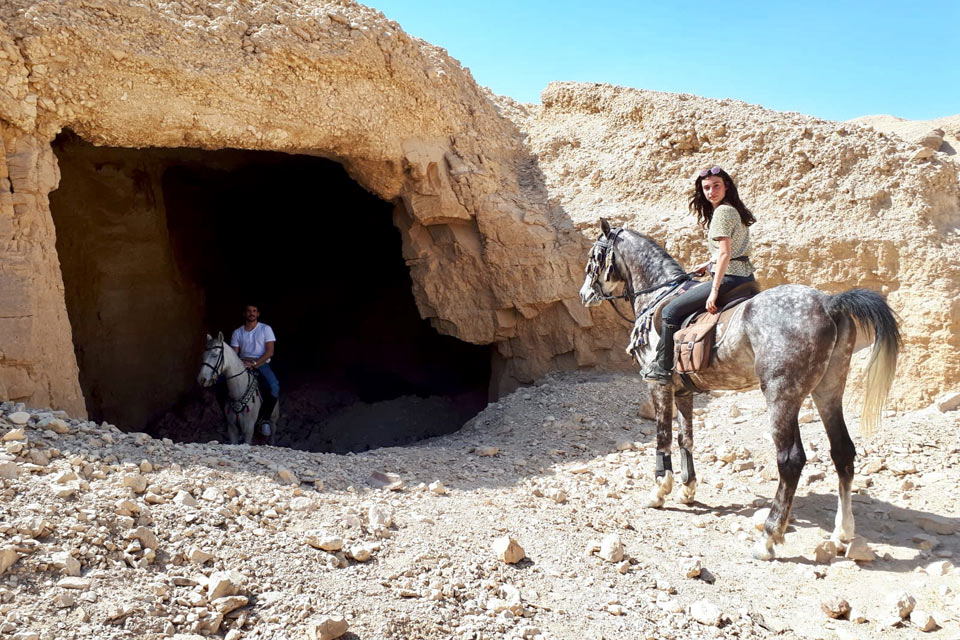 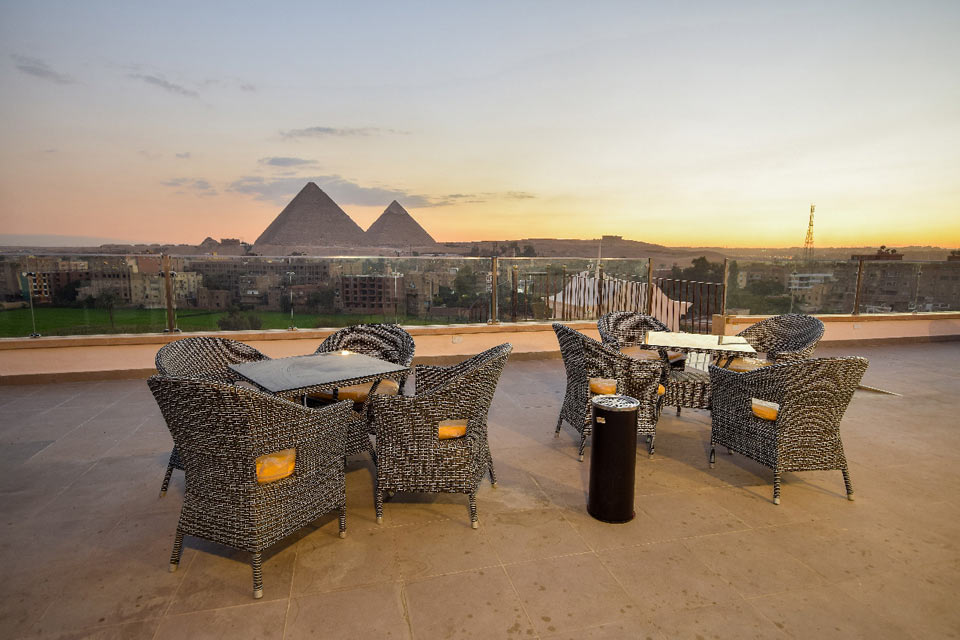 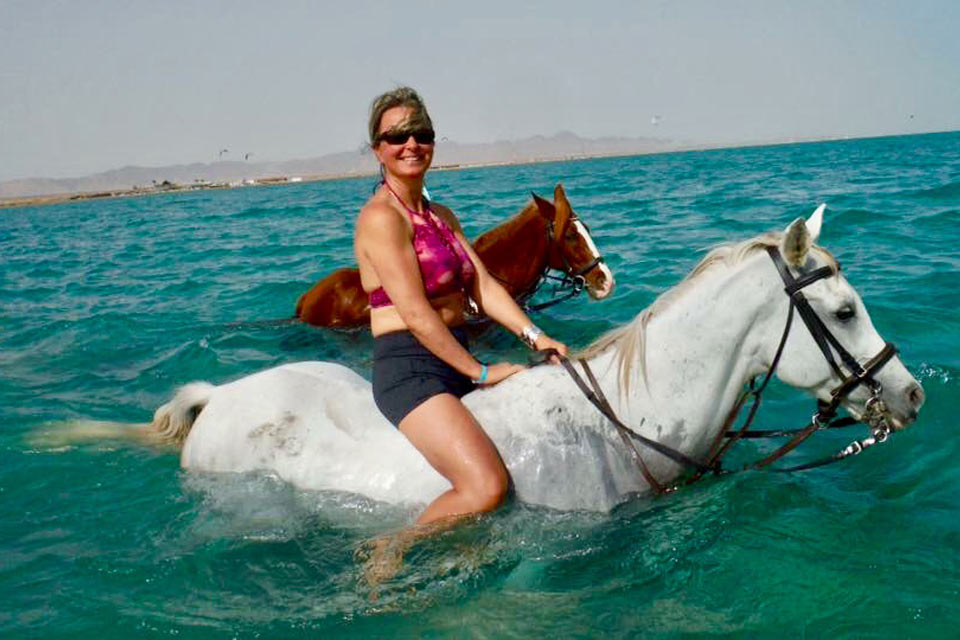 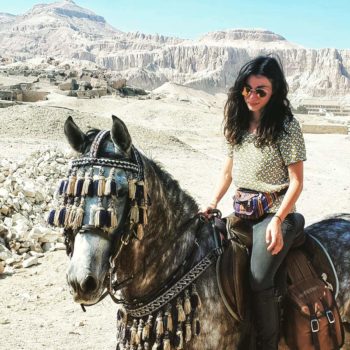 Day 1: Travel day. Arrive in Cairo and transfer to your guest house in Giza overlooking the Pyramids.

Day 2: Starting with a trail to the majestic Great Pyramids of Giza with your own guide to lead the way on horseback, you’ll enjoy personalized attention on your private tour of these famous symbols of Egypt’s ancient civilization.

The Great Pyramids and the Sphinx date back over 3,000 years. While there are actually over 100 pyramids in Egypt, the Pyramids of Giza are by far the most famous and are the last of the original Seven Wonders of the World. Your guide will provide a fascinating introduction to each of the three pyramids: Cheops, Khafre and Menakaure. You will have free time to enter one of the smaller pyramids while
Your grooms tend to your horses outside. 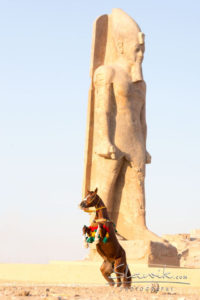 After visiting the pyramids, you’ll then continue across the plateau for a photo opportunity of the three pyramids rising from the sands, with the Cairo skyline in the background.A short ride later finds you standing at the feet of the Sphinx, for thousands of years the enigmatic symbol of Egypt. The Sphinx has the body of a lion and the head of a king, and is surrounded in mystery.

After a jam packed morning we will take lunch at a local restaurant overlooking the pyramids.

After lunch you will transfer by car to our fabulous stable right next to Abu Sir. Surrounded by sand dunes, the pyramids of Abu Sir form the necropolis of the 5th dynasty (2494–2345 BC). The location is incredible, a bliss to enjoy a moment of peace at the humble ruins, and revel in the serene desolation of the surrounding desert also offering riders a real opportunity to stretch out and fly with the horses.

From Abu Sir you will ride onto Sakkara Pyramids where in the Old Kingdom pharaohs were buried within Saqqara’s 11 major pyramids, while their subjects were buried in the hundreds of smaller tombs. Most of Saqqara, except for the Step Pyramid, was buried in sand until the mid-19th century, when the great French Egyptologist Auguste Mariette uncovered the Serapeum.

Covering a 7km stretch of the Western Desert, Saqqara, the huge cemetery of ancient Memphis, was an active burial ground for more than 3500 years and is Egypt’s largest archaeological site. 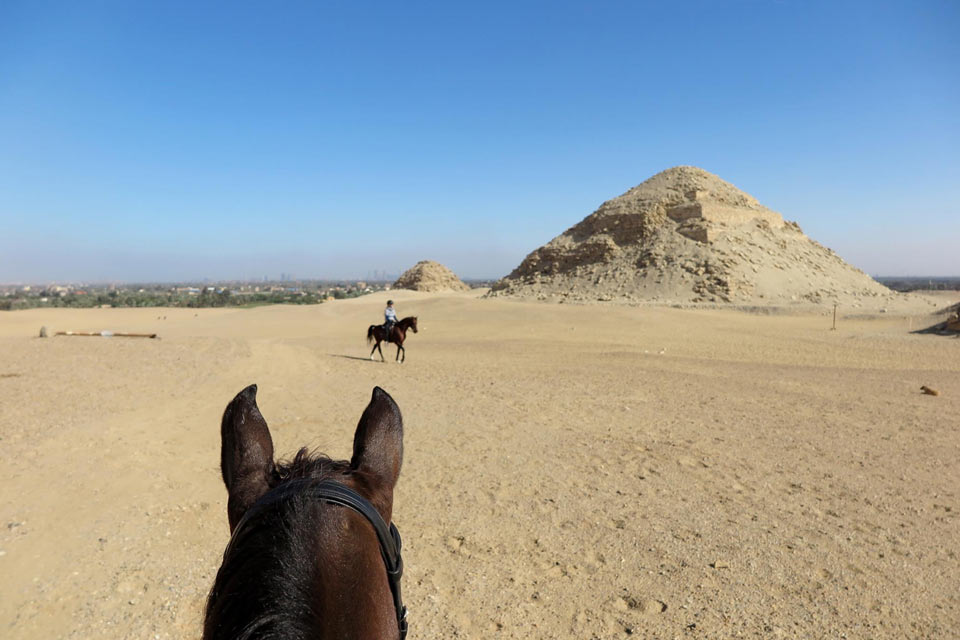 Day 3: Wake to the beautiful sound of the prayer call with stunning views of the River Nile from our local guesthouse in Luxor on the West Bank. Your morning starts with a non riding tour and an introduction to the land of the Pharaohs. You’ll visit Valley of the Kings, Tutankhamun and the temple of Hatshepsut.

After a fabulous morning site seeing you’ll return to your guest house for lunch and a a hour or so to relax before we are off again on our second tour of the day but this time by horseback! Our trail ride will show you real Egypt as you ride through the local villages and sugar cane field arriving at the famed temple of Habu Temple. Here you will dismount and while the team tend to your horses our local guide will take you inside to explore one of the most stunningly preserved temples in Egypt. After your temple tour we will take the route via the banana plantations where the horse can open up and fly in the sunset on your ride back to the stable. Dinner is served at a local restaurant. 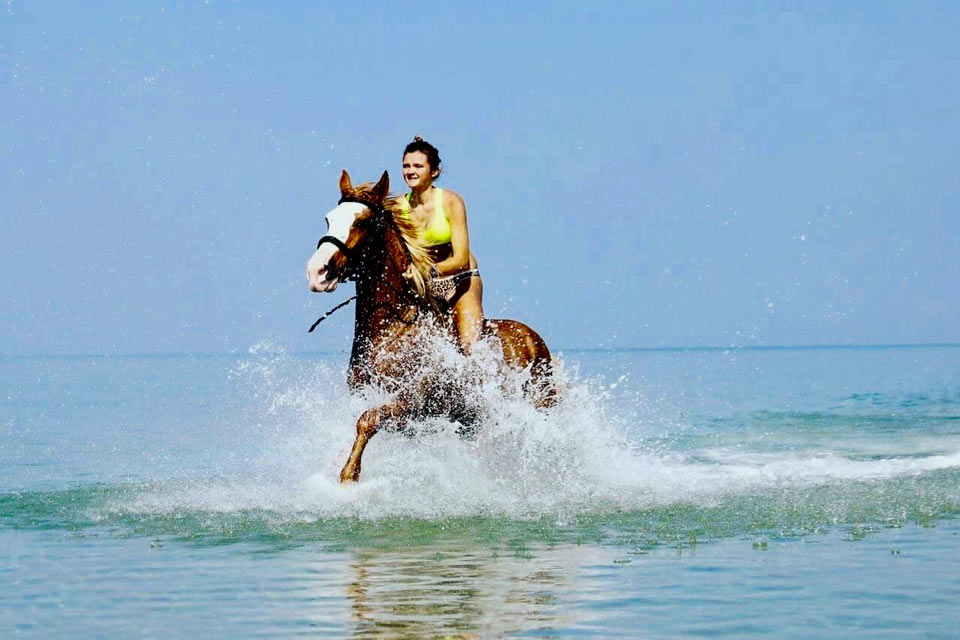 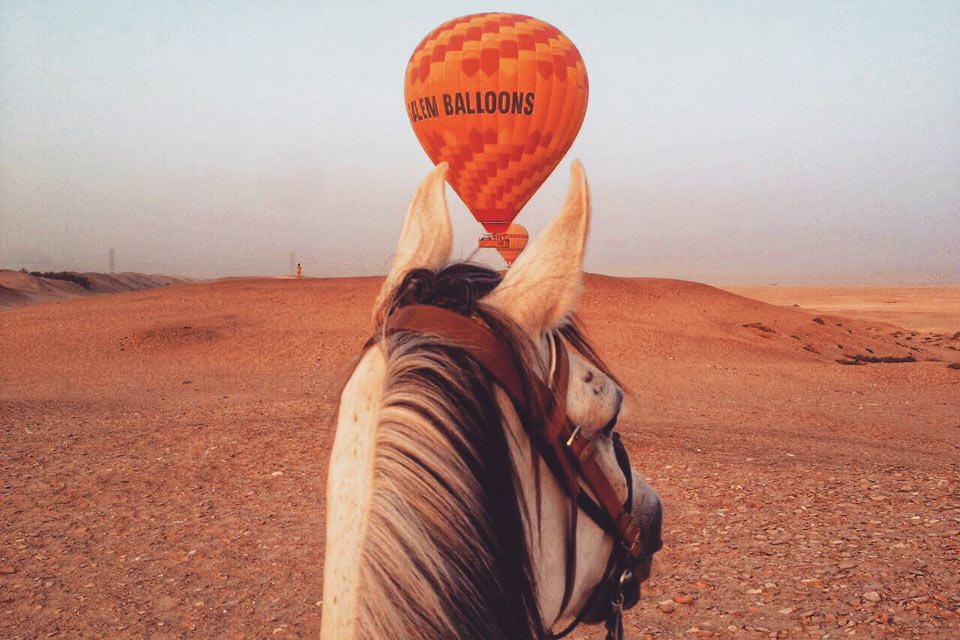 Day 4: Rise and shine! It’s a new day and what better way to start it with sunrise views across Valley of the Kings! This is a 4 hour trail ride with breakfast included. A chance to see mother nature’s beauty at her best! You will return around 11am and have a couple of hours to relax and lunch before we are off again, this time it’s a non riding tour of the East bank to Karnak temple, the Avenue of the Sphinx and Luxor Museum.

Transfer to Hurghada in the evening by car (included).
Riding time approx 4-5 hours. 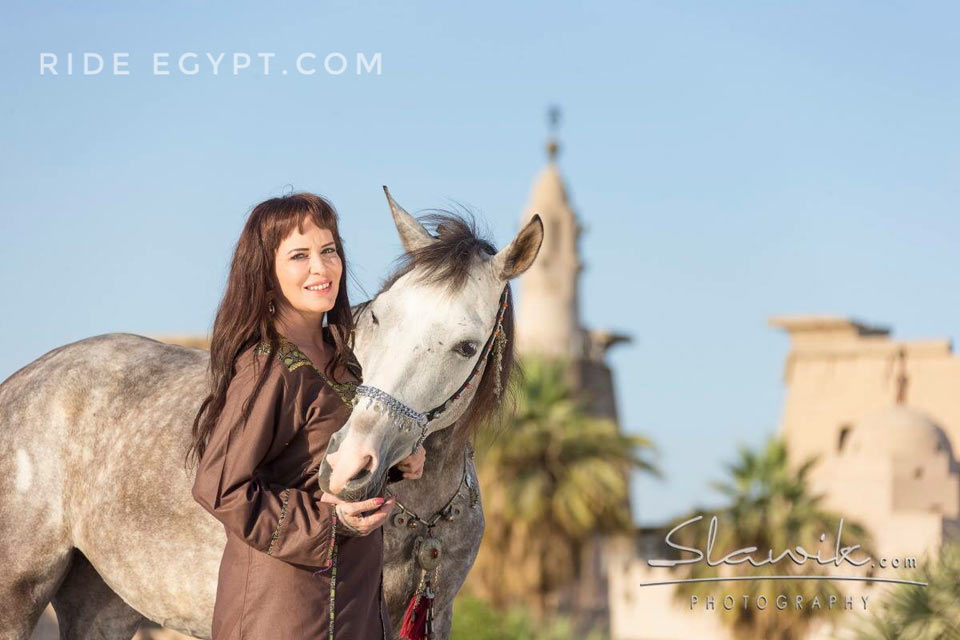 Day 5: Swimming with horses has to be our number 1 requested trip when visiting the Red Sea. We will take a morning trip through the desert to the beach where we will remove the saddles and swim the the tranquil crystal clear water bare back with your horse before riding back in time for lunch.

After this we are off to explore the Eastern deserts on quad bikes! The trip starts around 2pm and you’ll zoom through the deserts, meet our favourite snake man and have tea with the Bedouins, you’ll enjoy a fast pace drive back in time for sunset, you’ll also get to ride a camel!

This is a fun packed afternoon and a great way to experience many of the multiple adventures of Egypt in just a few short hours.

Riding time approx 3-4 hours for the horses & 3 hours for the quad bikes. You will finish the day with dinner in the desert and a belly dancing show. 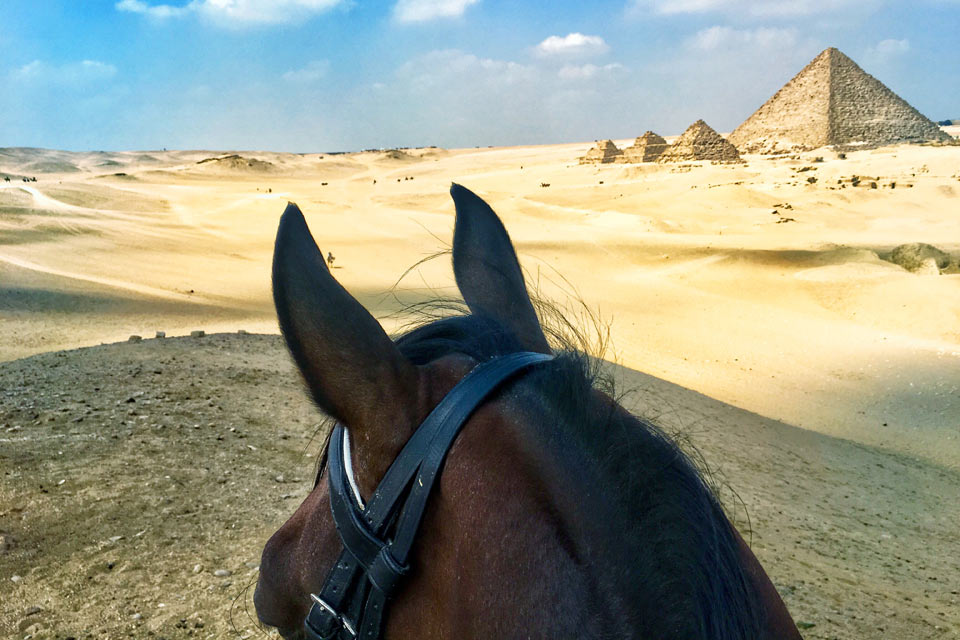 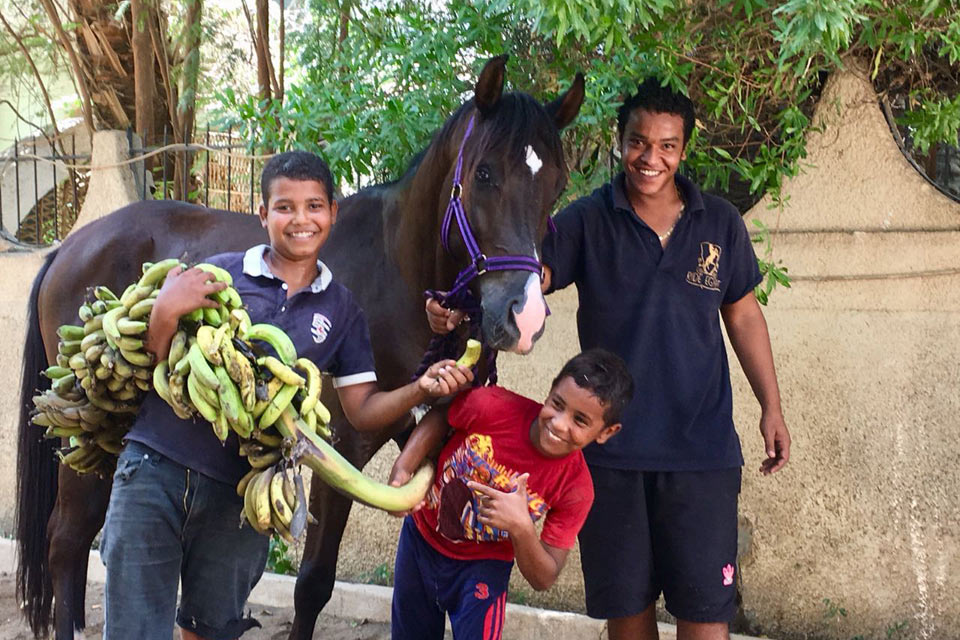 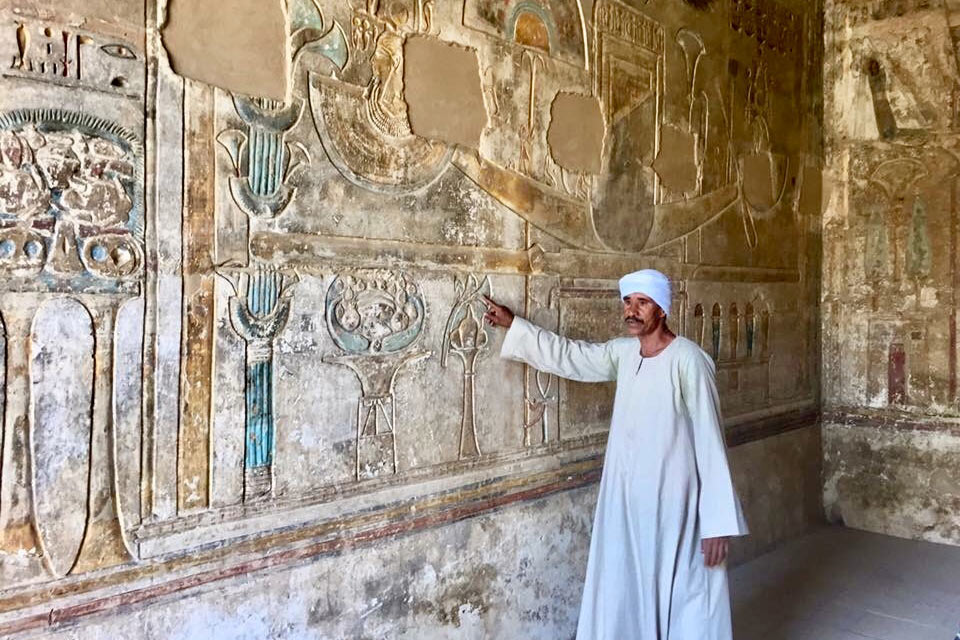 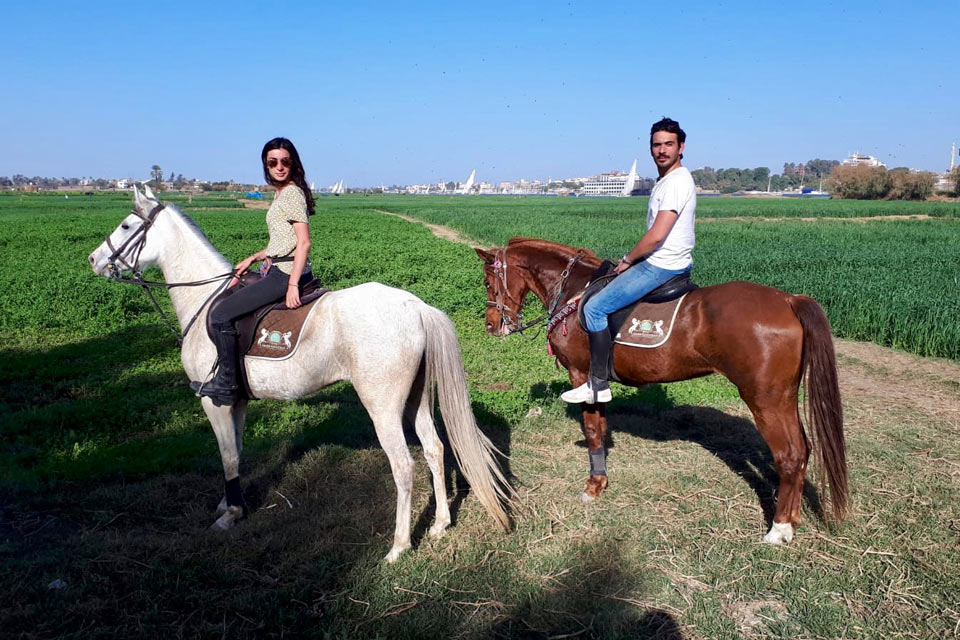 Our information page has more details on what is and isn’t included as well as useful general advice. 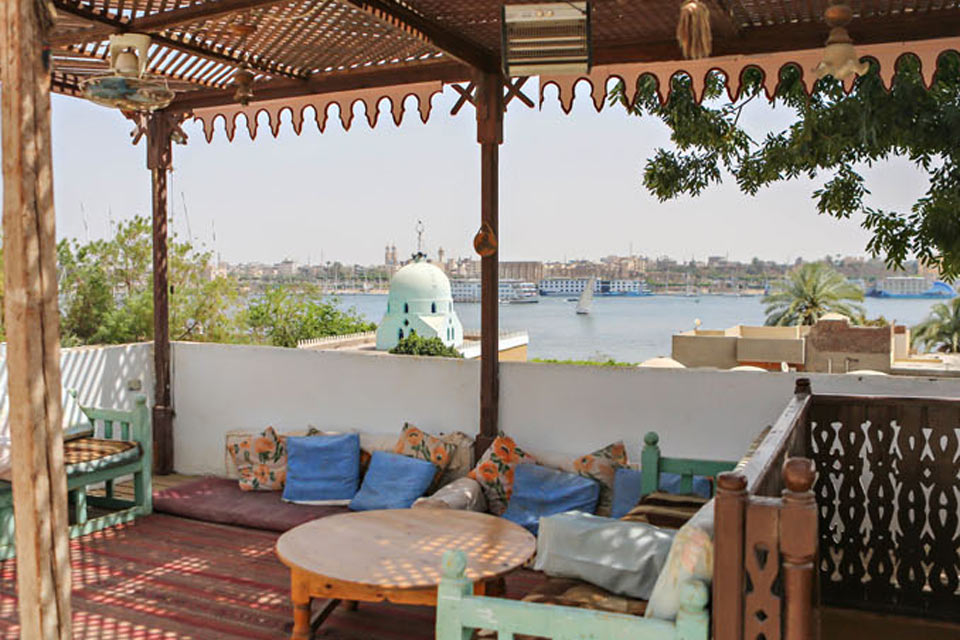 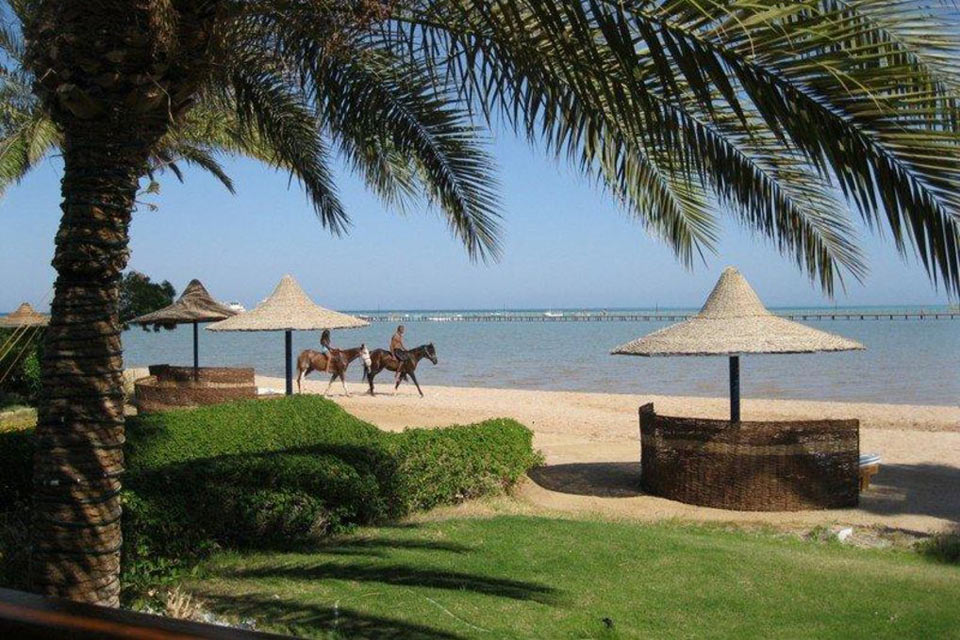 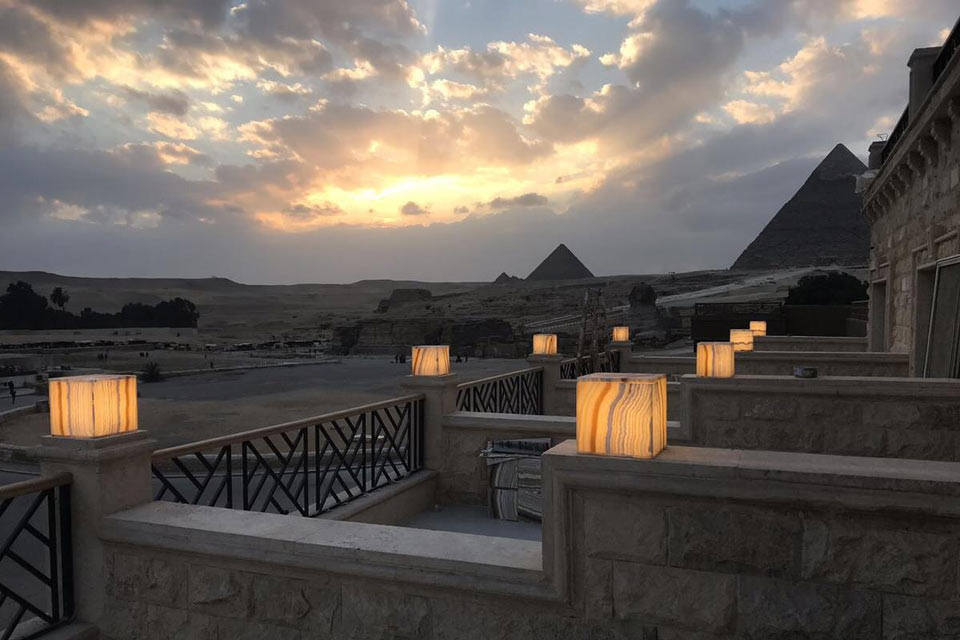 Other Mini Breaks at Ride Egypt 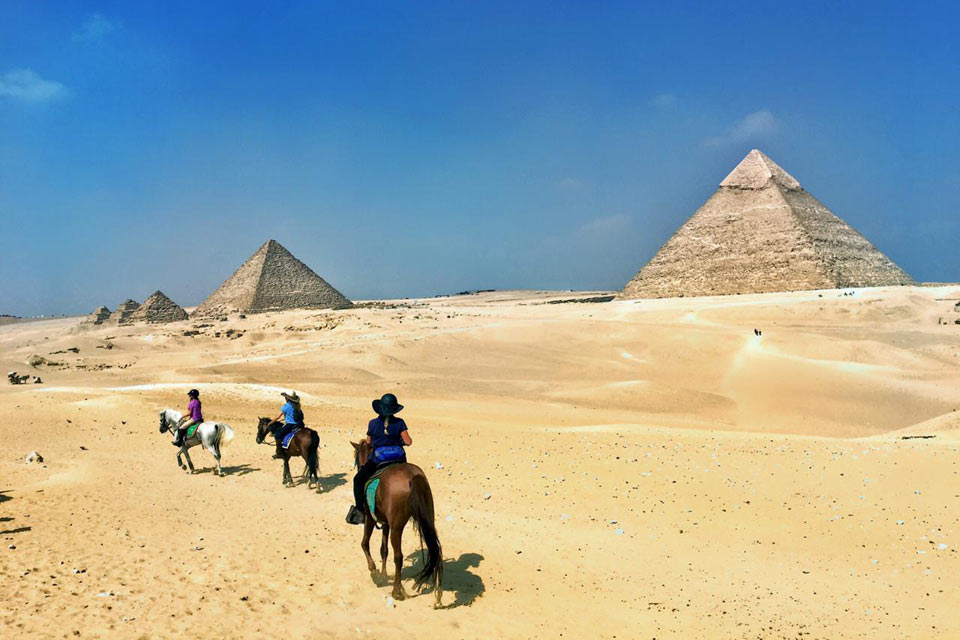 Our authentic Egyptian experience takes in the sights & sounds of Egypt’s bustling capital city – a once in a lifetime opportunity to explore one of the seven classic Wonders of the World on horseback. 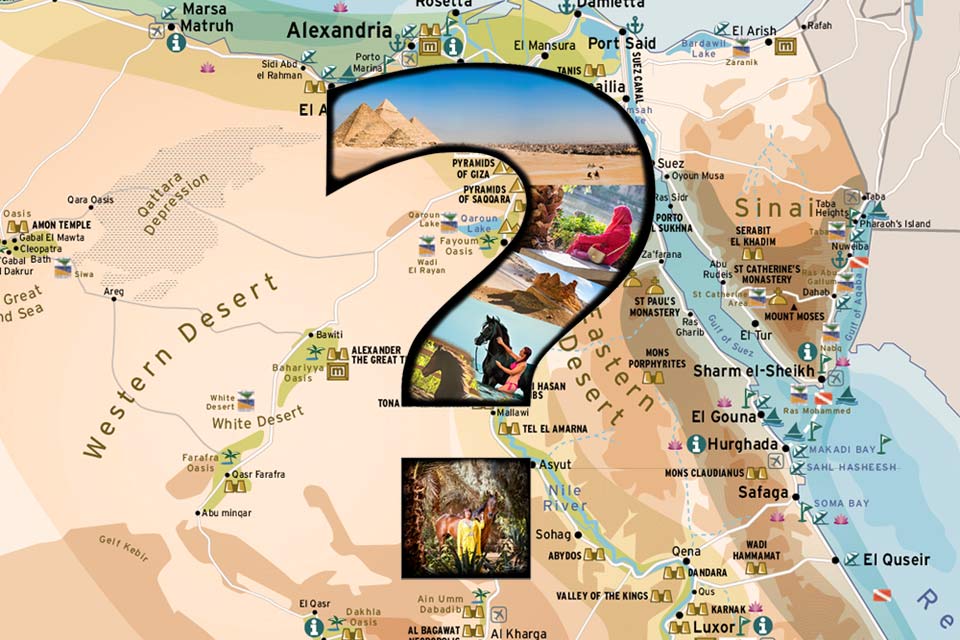 This holiday is designed for the free spirited who wish to experience Egypt as an Egyptian. You will receive only an arrival and departure airport, a welcome pack and a packing list! 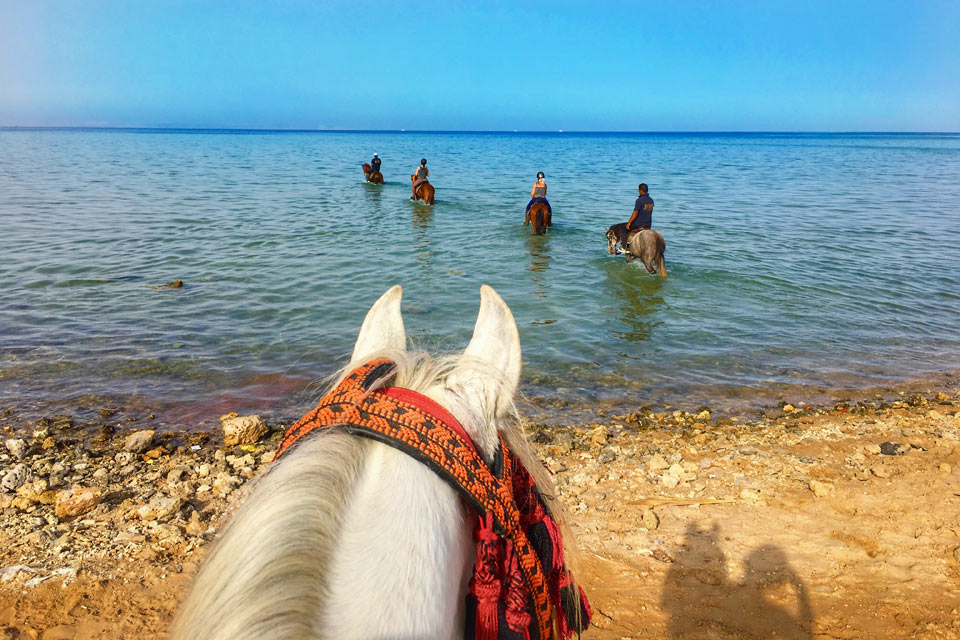 Hurghada is ideal for couples, families or friends as there’s plenty of activities on offer, including boat trips, kitesurfing, sunset quad biking safaris, paragliding and diving in the beautiful sea.